The France-Kosovo Undergraduate Research School of Mathematics brings together the most gifted students in mathematics from the University of Pristina and young French mathematicians for nine intensive lectures devoted to modern fields of mathematics.

This is a joint project of the Laboratoire d’excellence Milyon, the French Embassy in Pristina, and the University of Pristina. It started at the end of 2015 at the initiative of the French association Animath and of Qëndrim Gashi, Professor of mathematics at the University of Pristina. It aims at preparing the future generation of Kosovar scientists through living introductions to present day science.

Three times a year, three French lecturers meet a group of selected students for a four-day school in Pristina based on a flipped classroom approach.

Visit of a Ministerial Delegation in Lyon 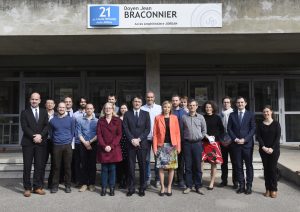 On Friday, March 31st 2017, the mathematics department of Lyon 1 university was honoured to welcome a Ministerial Delegation from Kosovo:

They were received by